No, I am not qualified to write on Virat Kohli

No, I am not qualified to write on Virat Kohli

No, I am not qualified to write on Virat Kohli. I have a long way to go. However, he did fight back after the calamitous England series in 2013. Enough said!

I am not sure if I am qualified enough to write articles on Virat Kohli anymore. Wait, let me take you down memory lane a little not much, but a little. I left my short career in Information Technology to become a cricket writer. Cricket, a sport I failed to make a career in. Writing, a career I want to succeed in. Therefore, bringing these two interests in the same plate would give me a sense of purpose, I thought.

I did write articles on Kohli ever since I took the new path. I hailed his batsmanship, criticised his decision-making and even reasoned why he should not replace MS Dhoni as captain in limited-overs cricket. I often prefixed his name with cliches like swaggering and talismanic, among others. My articles on him varied from analytical to flowery. I wrote everything I could to justify his superlative skills. There, I did it again. I had to use the word superlative to do justice to what he offers us.

For that matter, front pages grab him, headlines grab him, Google grabs him. Everyone and everything wants to get a bit of Virat Kohli, for the name has become a cool thing. Just like the Monday-related jokes, he has become the cool thing to be associated with.

All these thoughts popped up when I was editing my Editor’s article. And as I was done with my task, the Editor asked me how it was. Of course, he is my Boss and I had to praise. But, no. I admired it, for he managed to come up with a new angle to write on something I could not for the past few months. He wrote and I quote, “It is difficult being Virat Kohli. He seldom takes his cap off, but there are already streaks of grey on that beard, the beard that seems to be some kind of emblem for Indian Test cricketers.”

Yes, my designation says I am writer. I am not supposed to run out of ideas. I am not allowed to fall short of words. But that is what Kohli has done to us writers: he has exhausted my vocabulary.

Truth be be told, there was a time when I thought I learnt to write. Fancy idioms, modern-day jargons, catchy headlines: I have used them all. And I thought I had mastered writing. I even used the thesaurus, synonym-seekers on the internet to make my writing attractive. But I ended up articulating the same old thing. There was no pace in my writing. There was nothing new in it.

Again, that is what Kohli does to us writers. From envying to hating him, I did it all. I wondered how one could achieve so much in so little time. Let alone that, how could one do the same thing time and again. And not at the same rate, he jumps to the new level with every match.

When not playing cricket, he hits the gym and shares videos on Instagram that would give any gym-enthusiast a run for money. I mean, who wakes up at 6 am to work out during off-days?

I crib when I do not get a weekend off. Well, most of the Test matches pass through weekends, making us work making us work on Saturdays and Sundays, the only time I stay in the present.

But then, Kohli captains India during these weekends. He does not crib when he is on national duty. He goes out in the middle, does what he does the best, goes back, and follows the same, boring routine. And that is what separates us from him.

He pushed me to my limit. He became a nightmare. In fact, I wanted him to fail in India-New Zealand ODI series, so my Editor does not ask me to write a Virat Kohli article after the match. I rooted for Dhoni to steal his thunder. Dhoni, somehow, did manage to do so but could not match Kohli’s superhuman efforts. Yes, both are great in their own ways, and there should be no comparison whatsoever. But Kohli did it again. He overshadowed Dhoni. He even eclipsed some of Tendulkar’s records. And again, I found myself in a spot of bother.

Kohli played the same cover-drives, and I used the same analogies to describe them. His batting achieved new high, and I failed to match his standards.

“A straight drive, a cover drive You know how Kohli plays them, right? Do I need to articulate? On the other hand, it s fun to watch Dhoni play his unconventional strokes I mean, not that I am bored watching Kohli in action but you know,” I had mentioned in the live blog during the first ODI between India and New Zealand.

He infects everyone with his energy. The punches in the air after his reaches the three-figure mark, the verbal spat with his opponents to defend his team members, the spring in his walk even in pressure situations, the fight-back after he is being defeated: he infects everyone.

No, I am not qualified to write on Kohli. I have a long way to go. However, he did fight back after the calamitous England series in 2013. Enough said!

(Kaustubh S. Mayekar, a reporter at CricketCountry, played cricket at U-16 level. Like his idol Rahul Dravid, he often shadow-practises cricket shots. His Twitter handle is @kaumedy_) 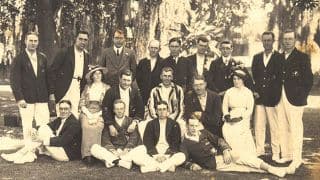