Cricket fanaticism has dropped over the years. The game lasts for 8 to 9 hours, barring T20 format, of course. And the conventional 8-hour job makes it even worse. You use apps to check live scorecards sitting in your office cubicle. You watch two-minute-late live coverage (oh, the irony!) on internet, if the IT team hasn’t locked certain websites. However, no longer do many take the effort to watch the match at the grounds. So, you come home after work, sit back on your laurels, switch on the television set, and tune in to the highlights. Or, a few, a handful wait for the match to last till the weekend and go watch it in the stands.

The capacity of Wankhede Stadium is approximately 32,000. Now, the very few we spoke about read 20,000 on Saturday morning, for the third day of fourth Test between India and England. Yes, Wankhede Stadium you-know-who’s home ground. Well, if you ask cricket purists from Mumbai to sum up their city in three words, they’d unhesitatingly say, “Sachin Ramesh Tendulkar.” But gone are the days when even Wankhede is packed during a Test. Having said that, 20,000 is still a decent turnover for Test cricket in a T20-dominated era.

This time the match is against England, a team that has won their last three series against India. The Barmy Army is present. As fate would have it, they sat in the ‘Sachin Tendulkar’ stand.

Thank goodness Ricky Ponting wasn’t present watching the match. If so, they would have gone:

I can’t read and I can’t write

I must be Australian

I can’t read and I can’t write

I must be Australian

I can’t bowl and I can’t bat

No doubt there will be chants of ‘Saa-chiiiin, Sachin’ echoing in the stadium. The chant, in fact, will be heard at this ground for as long as cricket will be played. Hence, Barmy Army has no option but to enjoy the gentlemen’s game in a gentlemanly manner. Of course, this is not The Ashes, and they are not here for banters.

My grandmother doesn’t know much about cricket. She, for sure, knows Tendulkar. I mean, who doesn’t? If India played, she asked whether he scored a hundred. Hence, I, as a kid, always thought the next name she knows would be the next Tendulkar.

Enter MS Dhoni. She now knows him as well.

Then, as an adult, I thought the same. Enter Virat Kohli. She, to put things into perspective, knows three names now: Tendulkar, Dhoni, and Kohli.

Yes, Kohli, the one who scored a hundred at Wankhede on the same Saturday we spoke about. That Goddamn Kohli!

Now let us walk to the moment when he took the crease.

‘Saa-chiiiin, Sachin’ still reverberated in Wankhede Stadium amidst the sound of a local train passing from Marine Lines to Churchgate or vice versa. It’s a template. You have to chant it at the top of your voice.

His fan Sudhir Gautam was present at the ground, waving the Indian flag, TENDULKAR written on his chest. So was Ram Babu, Dhoni’s fan, present. On the other hand, Kohli doesn’t have one. But his fandom for Tendulkar is no less than Sudhir’s.

In comes Kohli, after Jake Ball dismissed Cheteshwar Pujara off the second ball of the day.

It is Saturday. It is a lazy December weekend. People were still in queue to enter their respective stands. They had no clue Kohli would have to walk in so early. Nonetheless, of the handful of spectators present at 9.32 AM the ground cheered for him.

Almost in a chain reaction, the ones in the queue got to know that the people’s champ had entered the arena.

India’s next Tendulkar, they call him. Some statistics and numbers would say he has already bettered Tendulkar. But he is yet to match the adoration Tendulkar received. But again, he somehow matches Tendulkar’s aura.

Meanwhile, a fan was busy enjoying his Saturday at the venue with an Englishman.

India still needed 254 to eliminate England’s first innings total of 400. At other end was Murali Vijay.

Kohli successfully defended the remaining four balls of Ball’s over (I know the phonetics of the sentence sound funny).

In Ball’s next over, Kohli defended four more. Then Ball dropped short. Kohli rocked back and played a perfect pull to open his account. The Wankhede crowd came to its feet. Meanwhile, some were still looking for their seats.

England had three slips, a gully, and a point, but no third-man. Indeed, they were trying to set him up. They wanted him to nick it to one of these fielders, like he did in India’s tour of England 2014.

Kohli steered one past gully instead. Then he guided one to the vacant third-man. He had set out to rubbish England’s tactics. Mind you, the runs came at a brisk pace something the crowd demands these days. And Kohli gave them what they paid for and that too early morning on a weekend.

Kohli did not disappoint them. He gifted more boundaries to the crowd. Barmy Army, meanwhile, watched him play magnificent shots. Be it an Indian or an Englishman, you are a mere cricket fan when Kohli is action.

We know Kohli’s admiration for Tendulkar. We witnessed that during the India-Pakistan game in ICC World T20 2016.

Kohli punched in the air, put both his hands up in jubilance, roared the mandatory ‘come on’, and acknowledged the crowd, who chanted ‘Koh-liiii, Kohli’. He gave them a hundred a befitting gift.

This was Kohli’s 15th ton, his fourth as a captain in a calendar year, also equalled Tendulkar’s record incidentally at his idol’s home ground.

It is now time for another anecdote.

During an IPL game, the Wankhede crowd had booed Kohli, for he was playing for the opposition. Kohli had hurled the choicest of abuses in response.

Now time for the last anecdote.

The last time India played a Test at Wankhede was in November 2013 Tendulkar’s farewell match. The ‘Saa-chiiiin, Sachin’ chant was unstoppable that day, for they had been witnessing their hero in action for one last time.

(Kaustubh S. Mayekar, a reporter at CricketCountry, played cricket at U-16 level. Like his idol Rahul Dravid, he often shadow-practises cricket shots. His Twitter handle is @kaumedy_) 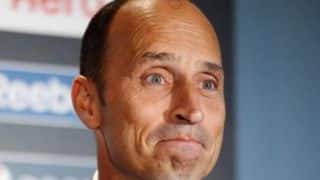