Though it was a KL Rahul show at the MA Chidambaram Stadium, Chepauk, Chennai on Sunday, a small gesture by Virat Kohli left its own mark during the India vs England Day Three of the fifth Test.

Though it was a KL Rahul show at the MA Chidambaram Stadium, Chepauk, Chennai on Sunday, a small gesture by Virat Kohli left its own mark during the India vs England Day Three of the fifth Test. Kohli’s celebration for his teammate’s hundred was one of the major highlights of the day. Rahul was batting on 98 and an overthrow gifted him three more runs as he got to his first hundred on home soil and fourth of his career. While Rahul and Kohli ran for the first, the latter started celebrating even before reaching the crease.

Kohli, on his way to his crease, gave a high-five to Rahul and after they completed the runs, came to him to give him a pat. The celebrations reflected the bond Team India shares and is a great sign of being a true leader who is always there to support the teammates. Though Kohli himself got out for 15 soon after, Rahul went on to surpass his career-best 158. He was however unlucky to fall for 199. He became the second Indian batsman and ninth overall to get out for that score in Test cricket.

With regular opener Murali Vijay injured, Rahul walked out with Parthiv Patel to start things for India. The openers put up a 152-run stand; Parthiv bettered his previous career-best of 69 and scored 71 before getting out. Karun Nair played a commendable knock as he scored his maiden half-century. India put up 391 for 4 at stumps of Day Three with Murali Vijay (17*) and Karun Nair (71*) at the crease. India have already won the series 3-0 and this Test is heading towards a draw unless we see the track change drastically on Day Four. 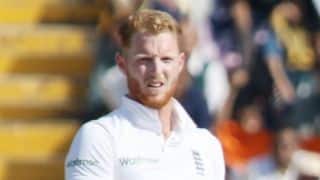 Ben Stokes: England didn't get the rewards that they deserved vs India India vs England, 2nd ODI at Cuttack: Ticket-sale to be cashless